Biden Won But the Election was “RIGGED” – Donald Trump

Biden Won But the Election was “RIGGED” – Donald Trump

President Donald Trump has for the first time acknowledged that President-elect Joe Biden won the US presidential election.

Trump made the admission in a tweet along with more unfounded claims of votes being unfairly and deliberately stacked against him.

He tweeted that  “NO VOTE WATCHERS OR OBSERVERS” were allowed in the polling places, but this is simply not true and can be easily disputed by the witness statements and video evidence of polling place observers watching the ballot count all across the country.

He won because the Election was Rigged. NO VOTE WATCHERS OR OBSERVERS allowed, vote tabulated by a Radical Left privately owned company, Dominion, with a bad reputation & bum equipment that couldn’t even qualify for Texas (which I won by a lot!), the Fake & Silent Media, & more! 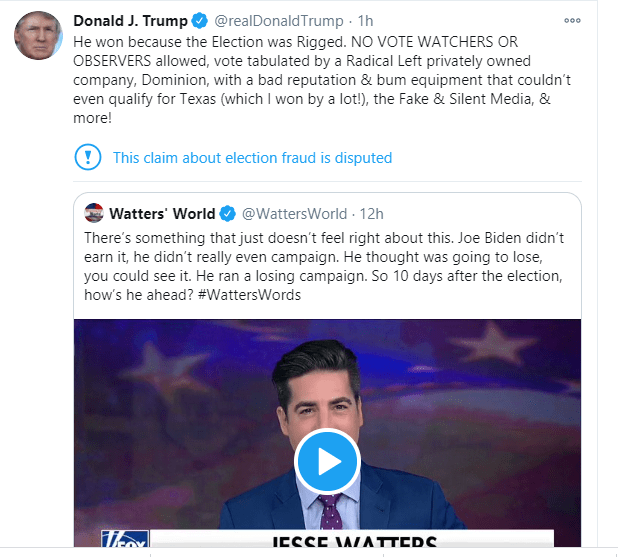 It is a significant acknowledgement from Mr Trump, who, despite losing the Electoral College by 74 and popular vote by 5 million, has refused to follow tradition and accept the result.

Last week he became the first president since 1992 to fail to get re-elected, following projections Mr Biden had successfully swung the key states of Pennsylvania, Arizona and Georgia to win the White House.

Boosie Badazz Shot During A Clash in Dallas

US ELECTION: Updates On Donald Trump Lawsuits Over Election Fraud

Trump Camp Keeps Some Distance From The Hunter Biden Story

Mics To Be Muted In US Presidential Debate To Stop Interruptions