The post-election firing of Esper was announced in a tweet on Monday evening November 9, and comes as Trump continues to refuse to concede the 2020 election to President-elect Joe Biden over yet to be proven allegations of mass voter fraud.

Also, Check “Since when does the Lamestream Media call who our next president will be’ – US president Trump tweets; FFK and other supporters react

In the tweet announcing Esper’s sack, Trump stated that Christopher Miller, a senior-ranking counter-terrorism official, would take over the top Pentagon job on an acting basis.

“Chris will do a GREAT job!” Trump tweeted.

“Mark Esper has been terminated. I would like to thank him for his service.” 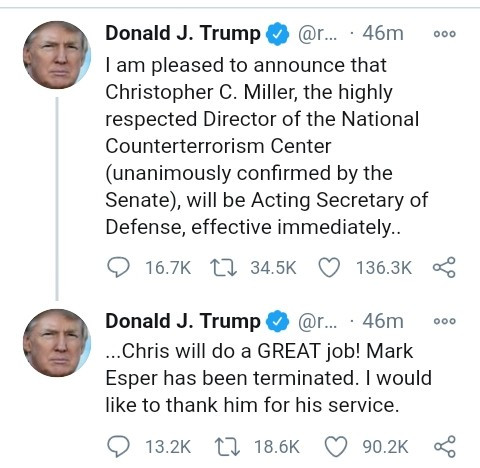 US Election Far From Over – White House Press Secretary