Liverpool midfielder, Georginio Wijnaldum has agreed to join Barcelona on a three-year deal after rejecting a switch to Bayern Munich.

Football transfer expert, Fabrizio Romano confirmed the news on Twitter, stating that the Dutch star will sign the deal until 2024 “in the next few days” after an emotional goodbye at Anfield last week.

He also said Barcelona and Wijnaldum’s representatives are working on “reducing” his salary. The 30-year-old was on around £90,000 a week with the Reds.

He wrote: “Gini Wijnaldum to Barcelona, confirmed and here we go!  #FCB The verbal agreement has been reached, Wijnaldum is joining Barça until June 2024. He’s expected to sign his contract in the next few days – work in progress to complete the deal reducing Gini’s salary. “

ALSO, CHECK List Of Prize Money All Premier League Clubs Got This Season 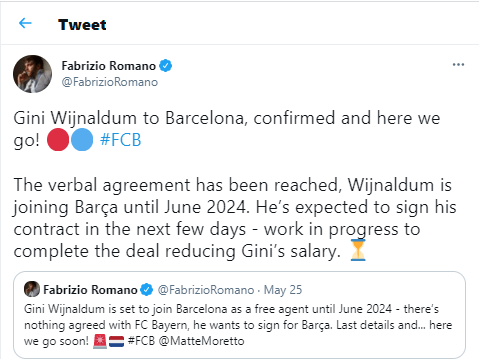 Wijnaldum, who joined Liverpool in 2016, will be best remembered for his Champions League semi-final brace against Barcelona as Liverpool staged a remarkable comeback in that memorable clash at Anfield.