Gordon Jones rattles off, in an almost perfunctory tone, the many things that he has been in life: a boat captain. A private pilot. A marketing representative for Xerox in Houston. A caregiver, sadly, for his dying father in Sacramento.

Jones doesn’t yet have a name for his newest thing. What he does have, though, is a story — one that he tends to tell from the middle, starting on a Saturday morning when it became clear that Joe Biden would be our next president.

Shortly afterward, he got a frantic phone call from his cousin in Michigan.

“She said: ‘You better get up. There are a lot of things going on. There’s 50,000 likes and this and that and so on,’” Jones recounted with a hearty laugh over Zoom. “I’m like, ‘What are you talking about?’”

A powerful photo illustration of newly minted Vice President-elect Kamala Harris walking alongside the shadow of civil rights trailblazer Ruby Bridges was being shared at a furious pace on Twitter and Instagram. Even Bernice King, the daughter of the Rev. Martin Luther King Jr., tweeted it as a way to celebrate Harris becoming the first Black person, first South Asian and first woman to become vice president

Jones recognized the photo illustration immediately. He had helped create it for his fledgeling online brand, Good Trubble.

In fact, the illustration — named “That Little Girl Was Me,” referencing the rhetorical swipe over busing that Harris took at Biden during a Democratic primary debate — had been posted on Good Trubble’s website for weeks. It’s just that not that many people noticed.

Goeller shook her head. Shooting Jones an amused glance over Zoom, she told me he said something different: “Bria, check it out. We’re going viral.”

The story of how they ended up stuck together is even odder. It begins at a little pub in Sausalito.

It was 2016, and Donald Trump had just been elected president. Jones had recently returned to his native California after living for several years in the U.S. Virgin Islands. He remembers ripping into his friends over drinks one night.

“I said, this is crazy!” Jones said. “How did you guys let this happen?”

As the child of a family of activists from Palo Alto, he quickly went from anger to figuring out how he could contribute to the newly formed resistance. Tapping into his marketing background, Jones came up with a pithy slogan: “I’m not anti American. I’m just anti-stupid.” He decided to put it on T-shirts and sell them on the cheap at protests. The shirts sold out.

Then, as Trump was trying to ban travel to the U.S. from several majority Muslim countries, Jones came up with another slogan: “You in danger, girl.” This time, he commissioned an artist to bring it to life, putting the words next to the Statue of Liberty. He sold the T-shirts under his newly created online business, WTF America, the predecessor to Good Trubble.

Then Jones really got busy.

He tracked down Sirron Norris, the San Francisco muralist and illustrator known for his work on the TV series “Bob’s Burgers.” Jones wanted his help. “I said, I’m your biggest fan,” he deadpanned.

Norris, understandably busy, instead referred Jones to his assistant, Goeller. Originally from Louisiana, she has lived in multiple states and countries and only landed in the Bay Area in January. The COVID-19 pandemic has made networking hard and getting paid for making art even harder.

“But I met Gordon and it has been so wonderful,” she told me. “Gordon has made it so that now I can do art for a living officially.”

The idea to do an illustration featuring Harris came from Jones. He wanted to empower little Black girls by showing the arc of progress — from a 6-year-old Bridges facing down an angry mob to desegregate a school in Louisiana to a 56-year-old Harris strutting in heels, perhaps on her way to her office as vice president.

“I had this idea because I’m a child of the ’60s,” Jones said. “In Palo Alto, we didn’t have busing, but I have a lot of friends, a lot of my peers who are my age experienced it. Even as a 5-year-old — Ruby is only about three years older than me — I knew what was going on.”

Jones and Goeller settled on using the silhouette of Bridges, as shown in the 1963 Norman Rockwell painting “The Problem We All Live With.” Goeller said she used several photos to build composite image of Harris, looking extremely powerful and confident.

“I wanted some swag to it,” Jones said.

The end of this story has yet to be determined.

Earlier this week, Jones shipped a bunch of shirts with the “That Little Girl Was Me” illustration to former San Francisco Mayor Willie Brown, in hopes of getting them to the Harris camp. Good Trubble also has reached out to the Ruby Bridges Foundation in hopes of getting her to sign a limited number of prints to sell and raise money for the nonprofit. 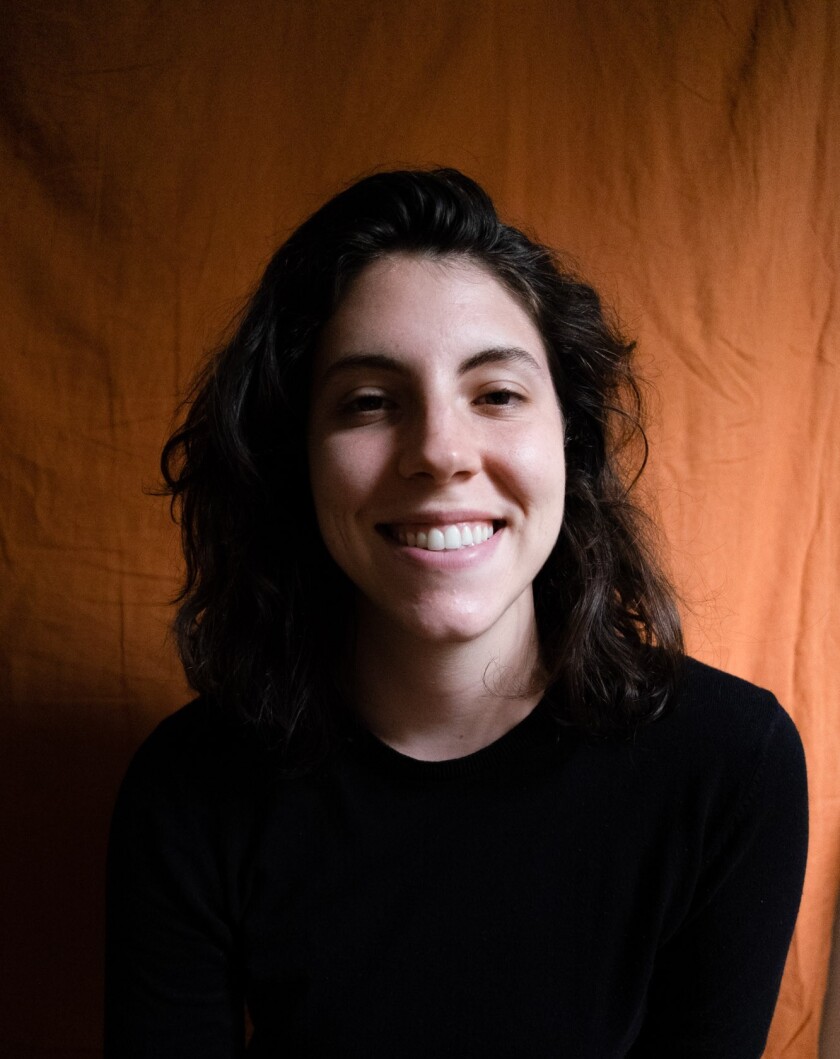 Not long after the photo illustration went viral, Bridges shared it with a comment on Instagram. “I am Honored to be a part of this path and Grateful to stand alongside you,” she wrote. “Together with Our fellow Americans, as we step into this Next Chapter of American History!”

A few days later, she announced that her mother, Lucille Bridges, who dutifully walked her daughter to school every day alongside federal marshals, had died — making this week of progress for Black women a little bittersweet.

As for Jones, he’s got big plans for the future at Good Trubble. He’s pushing Geoller to stick around as the brand’s main artist.

Yet Geoller, however grateful, also is a bit cautious of what that would mean.

“I definitely want to get as involved in this as I can. I’m trying to be careful, too, though,” she explained. “I know that as a white woman, I want it to maintain a Black-owned and -operated team. And so I’m struggling with that a little bit.”

But she also knows Jones isn’t really the kind of person to take no for an answer.

“It feels fantastic, obviously, to be able to not be struggling,” Goeller said. “Although I’m not really profiting much from this, I think that I have the platform now to be able to really reach people with the art that I’m doing and that’s all I could have asked for.”

97% Of Young Women Have Been Sexually Harassed – Research